Music has no borders, and flows like the rivers, unbound from one land to the next.

MezzopTrio brings new musical colours to Dutch stages. They are three musicians from the Middle East, Rani Elias (trumpet), Karoun Baghboudarian (cello) and Setareh Nafisi (piano, daf, voice), who perform music from their homelands, combining it with classical Western influences. Their unique repertoire, arrangements, and improvisations make them ambassadors of their musical and cultural heritage in The Netherlands and beyond. This repertoire focusses mainly on classical music from the Middle-East, Eastern-Europe and Armenia, however they have also commissioned and performed new works from Dutch composers who share this musical lineage.

All three received classical training and had respected careers in their home countries of Syria and Iran before emigrating to The Netherlands where they all received master’s degrees, furthering their musical vocabulary: Rani has a uniquely lyrical tone as a result of his ability to play Middle Eastern scales (maqams) on a classical trumpet. Karoun brings unmistakable authenticity in her use of traditional Armenian music in her cello playing, and Setareh brings a wealth of different hues through piano and daf (an Iranian percussion instrument).

During their improvisation piece Setareh also incorporates both singing and poetry alongside her piano playing, and together with Karoun and Rani uses traditional Eastern rhythms and scales to create new music in the moment which draws together all of these musical and cultural elements. 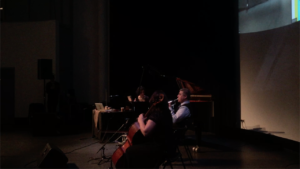 Art without Borders On Friday October 2nd, 2020, MezzopTrio was invited to perform at the opening of an exhibition titled ‘Art Without Borders’ at Podium 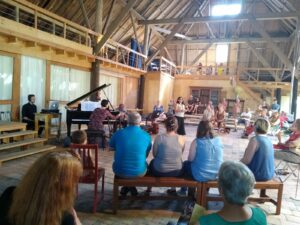 Fill in the form, and we will try to answer as soon as possible!