Born in Northeast Syria, Rani grew up singing, dancing and playing Syriac music on the trumpet. From 1999-2015 he played trumpet in The Syrian National Symphony Orchestra, and participated in most of its concerts in Syria and abroad.

In 2003, Rani graduated from the Higher Institute of Music in Damascus. He taught trumpet at the Sulhi Al-Wadi and Al-Assad Youth Music Institute in Damascus from 2003-2015, and from 2006-2008 at Amman National Institute for Music in Jordan. He was also brass instruments trainer in the Syrian Military Band from 2008-2011 and the Police Sciences Faculty’s band.

In June 2016 he participated as a guest soloist with Netherlands wind ensemble (NBE) in Het Muziekgebouw (Amsterdam). In the same year he played with the Syrian Big Band in the North Sea Jazz Festival (Rotterdam), International Jazz Days (Korzo, The Hague), Celebration Codarts/Grounds (Rotterdam), and in Bimhuis (Amsterdam). He was also a soloist with WDR Funkhausorchester (Köln).

In 2018, Rani was awarded a master’s degree in classical music from Prins Claus Conservatorium Groningen. Also in Groningen, and since September of the same year Rani has been the conductor of New Life Choir. In September 2019 Rani, together with Karoun Baghboudarian won The UAF Award, and they were the ‘stars of the year 2019’ in The Netherlands.

Rani currently works as a trumpet teacher in the Groningen area, and music workshop leader with De Vrolijkheid, and he is also the first trumpet player in The Syrian Expat Philharmonic Orchestra (Europe) and in Deutsch-Syrische Philharmoniker (Bremenand). 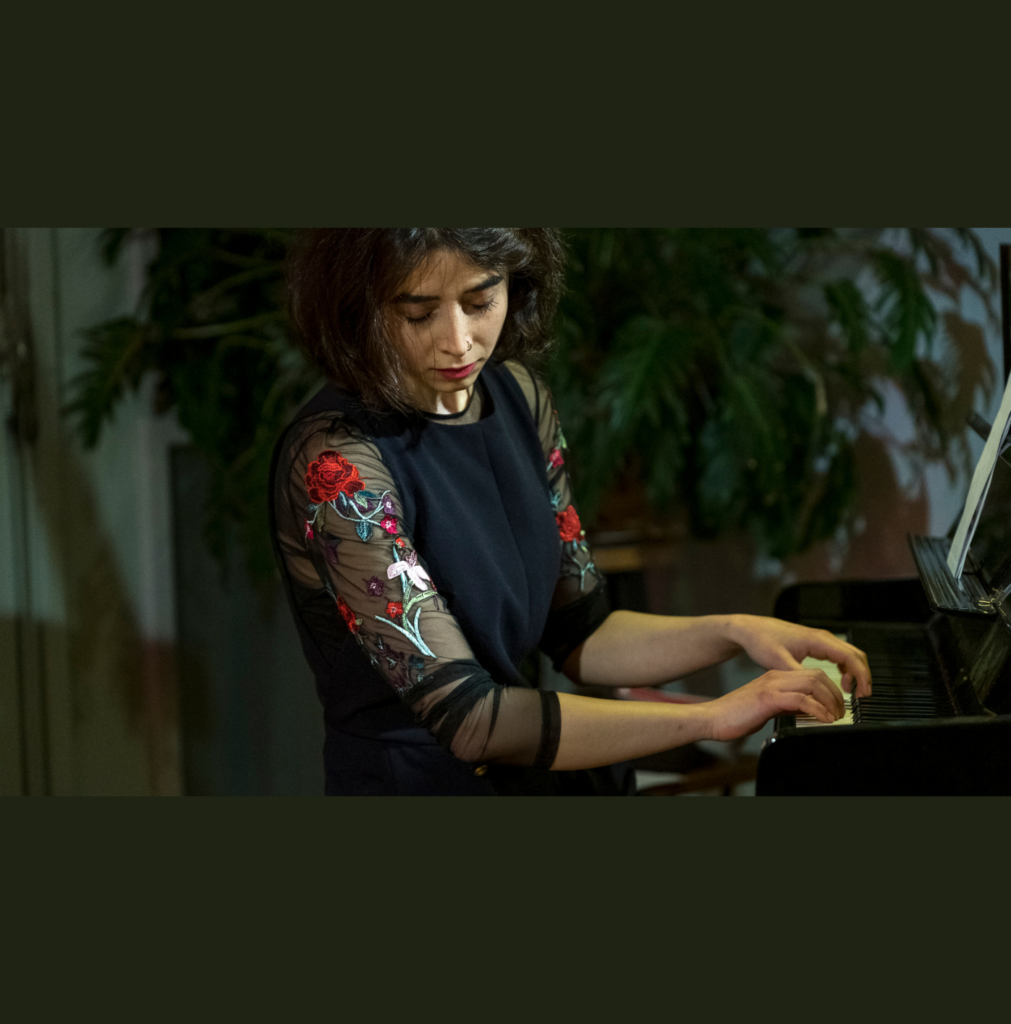 Setareh Nafisi is a composer, pianist, improviser, and multidisciplinary artist. Her work is most often described as ‘beyond borders’, and draws together all the threads of her musical journey, incorporating influences from classical, electronics, avant-garde and Eastern disciplines. Her piece Wayfarer for string quartet and electronics was described as “very emotionally intelligent” (Jon Hemmersam, 2020), and her on stage performances have been described as “magnetic” (RADAR festival 2019). Inspired by her multi-faceted cultural journey, she is forever searching for a broader musical vocabulary with which to communicate her stories to the new audiences of today.

Currently based in Netherlands, Setareh has been commissioned by Het Nationale Ballet, Unicef, Holland Opera, Grachtenfestival, and McNicol Ballet Collective (UK). She has composed for award winning short films with Vidamir, and regularly performs her own compositions with her ensembles and bands. She has collaborated with world renowned artists such as Oene van Geel, Nicholas Thayer, and choreographer Peter Leung. She is also one of the founders of ‘The World We Live In’, a socially engaged community arts foundation with outreach and educational features, through which she is teaching a module at Prins Claus Conservatory.
Setareh began her musical education at age four, studying piano, and later violin, vocal and percussion, going on to tour both nationally and internationally with Tehran Vocal Ensemble, Tehran Symphonic Orchestra, Tehran Choir and also collaborating with independent composers and ensembles.
She gained a bachelor degree as a concert pianist from Tehran Art University, and then a second bachelor from Prins Claus Conservatoire (Groningen, NL), this time incorporating improvisation and composition. She then took further study in composition for film at Amsterdam Conservatoire (CvA), before completing a Masters research in composition at the intersection of acoustic and electronic instrumentation for new audiences at Prins Claus.
In her practice as a composer, performer, improviser and multi-disciplinary artist Nafisi uses both classical and contemporary techniques, electronic and acoustic elements, in order to best tell a story that needs to be told. An artist beyond borders! 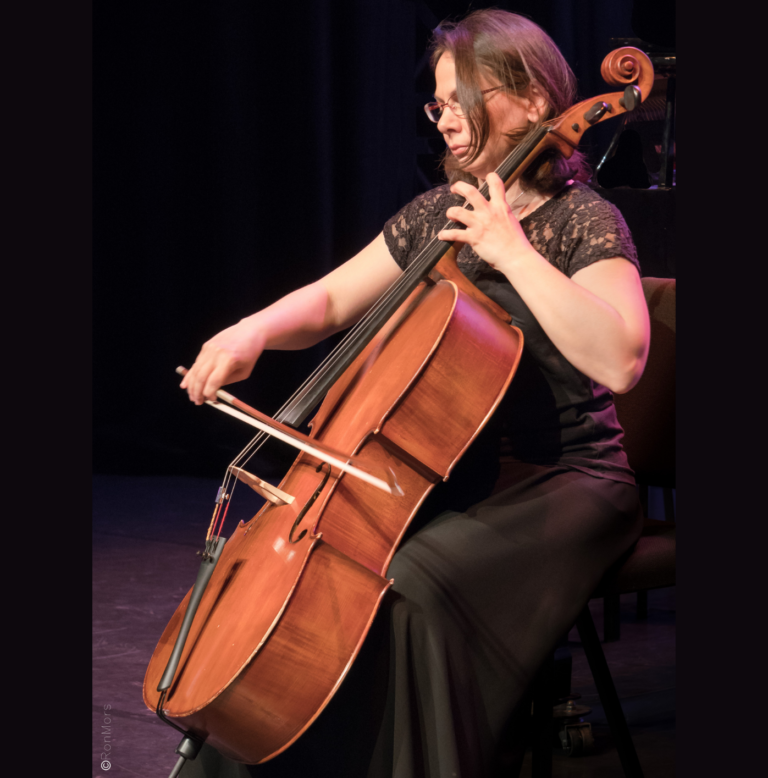 Born in Damascus in 1979, Karoun began studying cello at the age of 7 at the Sulhi Al-Wadi Music Institute. At the same institute Karoun was a part of the children’s orchestra, taught cello from 2003, and contributed to their syllabus from 2011-2014. In 2003 she graduated with a degree in Cello and Ear Training from the Higher Institute of Music in Damascus, where in 2004 for the first time in Syria, she formed a solfège syllabus.

She was a founding member of the Syrian National Symphony Orchestra, performing with them in Syria and abroad. She has also played as a soloist under the baton of Sulhi Al-Wadi in 1997 and Missak Baghboudarian in 2010.

In 2006 she took part in The Young Euro Classical Music Festival in Berlin, with the Youth Orchestra of the Higher Institute of Music, and in the same year also attended other workshops such as Maggio Formazione in Florence-Italy. Karoun was a member of Violoncellissimo cello group and of Damascus Baroque Soloists with whom she performed many concerts and workshops from 2009-2011.
In 2009, she was awarded a Diploma in Formation Musicale from the National Conservatory of Music in Lyon-France. She then attended a number of Kodaly Music Educational System workshops in Lebanon.
In Syria in 2010 Karoun founded the Kiddy Orchestra, a unique and avant-garde music project for children aged 3 to 7 years old, in which she is also an instructor. In June 2015, they presented their 5th and final annual concert.
In 2015 Karoun moved to the Netherlands, where now plays with several orchestras in the Northern part of the country. Since 2016 she has been an assistant at the Hello Cello Orkest within the Cello Biennale. In October 2017 Karoun reimagined her Kiddy Orchestra project, this time in the Northern Netherlands, and throughout that year she played as a guest cellist in the WDR Funkhausorchester-Köln. She participated in the EU-Terpe project 2018 in Italy, Spain and Bosnia and performed with SEPO-Syrian Expat Philharmonic Orchestra in several European countries.
In June 2018, Karoun graduated from Prins Claus Conservatorium, Groningen NL with a master’s degree in Instrumental Learning and Teaching Cello.
She is currently working as cello teacher and project assistant with De Cello als Welkom project in Groningen at Prins Claus Conservatorium. In July 2020, she participated with Luigi Cherubini Youth Orchestra under the baton of founder, the Italian maestro Riccardo Muti in the 24th Roads of Friendship concerts.